I’ve only been talking about writing this post for a couple of weeks. I finally snapped a couple photos over the weekend to show you what we’ve been working on it Charlie’s room. I hesitated to share them only because it’s not finished. As it stands currently, the room is a bit blah. However, I know that all of those little details that are currently lacking in the space is going to bring it all together. So you might be wondering what brought on the decision to update his room when it was perfectly dine. It really all started with the clubhouse bed. Friends, he was scared to sleep in it. When he did he would wake up in the middle of the night and call out for us. He didn’t like to climb down the ladder at night even with a night light. Our little sleep terrorist finally pushed us to the decision to sell his bed. All is well though, a good friend purchased it for her two boys and they love it! This led to purchasing a new bed and Charlie’s updated room design came from that. Down the rabbit hole I went!

Here’s his room before – 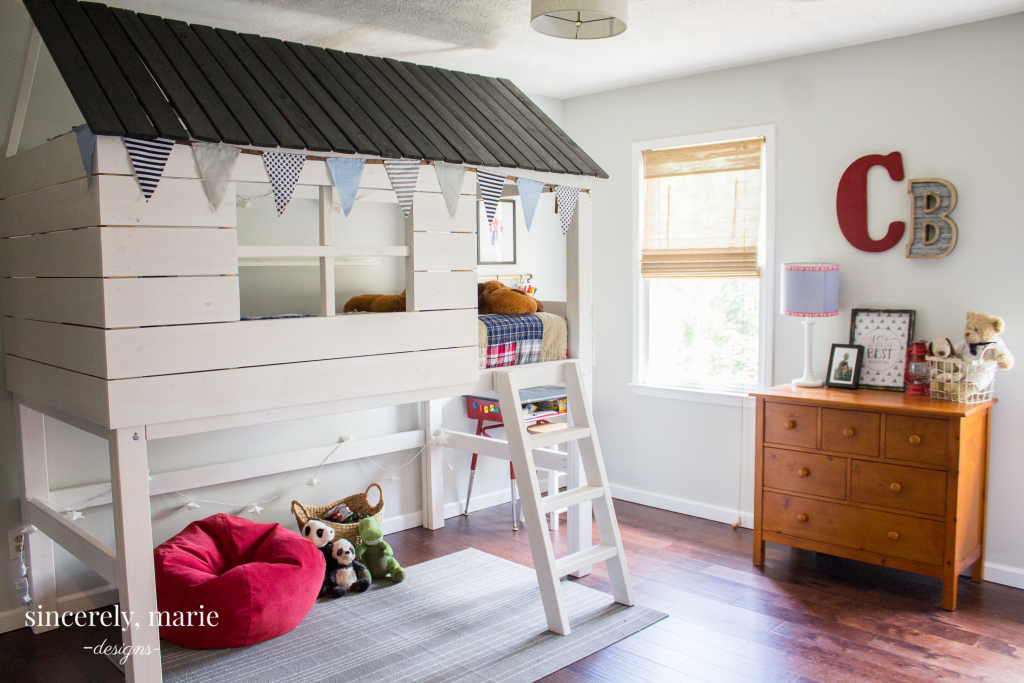 Here it is today – 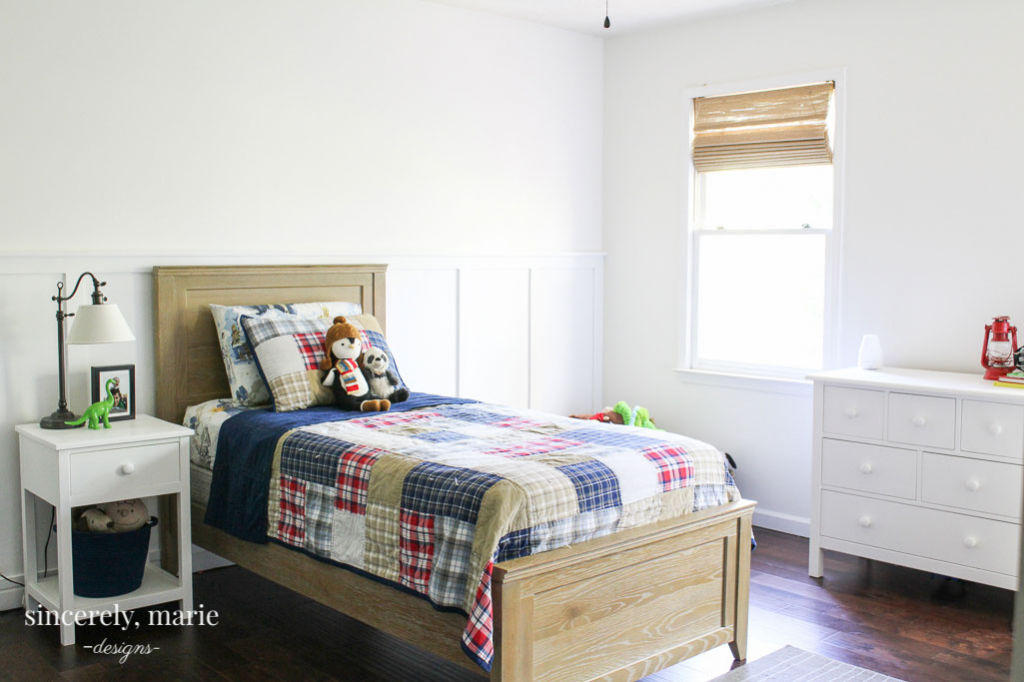 When Charlie was asked what he wanted his new room to look like he said he wanted a Star Wars room. (You can see his old room here.) He showed me a picture from the Pottery Barn Kids catalog that was covered from head to toe in Star Wars items. I’m not one for overly themed rooms so I decided that I’m going to add touches of those things he wants without going all out. He already had the sheets and I plan on using simple more solid quilt and duvet. I’m also going to bring in some of those items with artwork and decor. Here’s the original design board for the space – 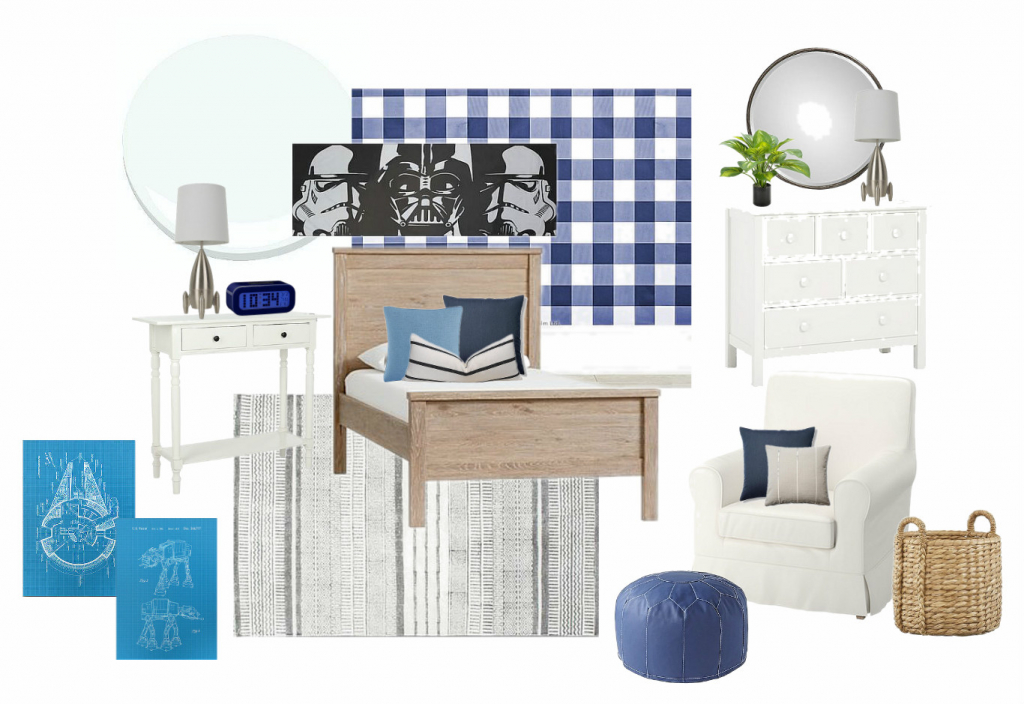 This post contains affiliate links. You can read my full disclosure here

We had originally planned on building a new bed but when I saw the Charlie Bed at the PB outlet I knew it was perfect! At a steal of a price, we snatched it up. He didn’t have a nightstand because of the previous bed. This is what I built. I shared a photo of it while I was in the process on IG stories. I hadn’t built anything in almost a year, but It turned out just as I had hoped. I hope to share plans on that later. If you’re not much of a builder here is the nightstand that I was going for –Kendall nightstand. 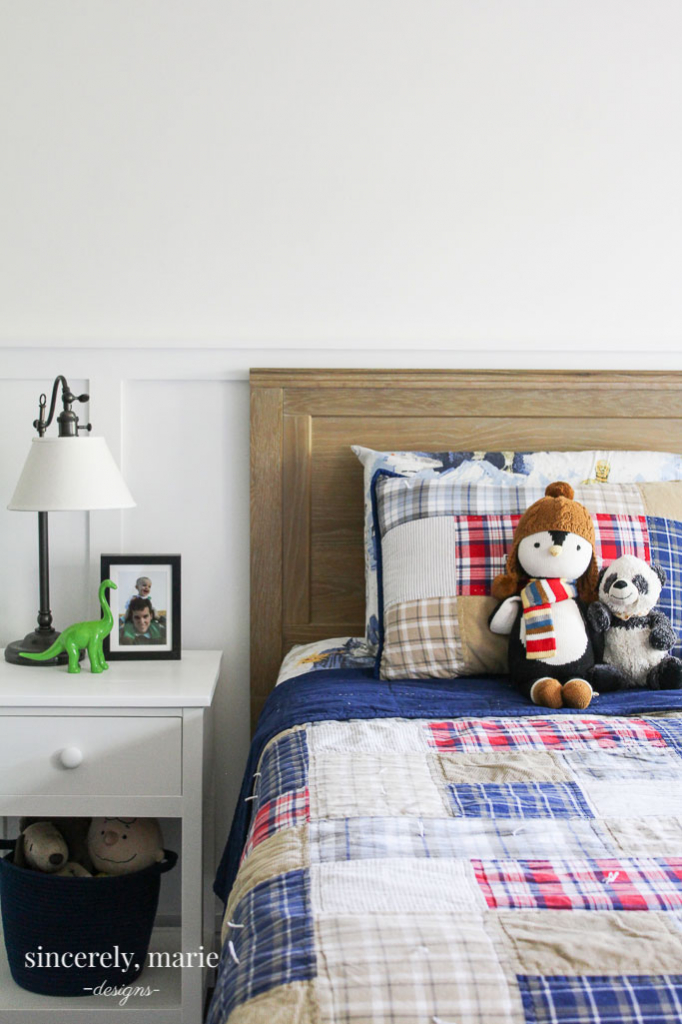 Let’s talk about that blank wall above his bed. His room was originally a gray color and when we decided to add board and batten to half the wall it really made the rest of the walls dingy and frankly, in need of some love. We settled on Oxford White. It’s a warm white with a slight yellow undertone. It immediately made the room brighter and larger looking. My plan was to add buffalo check to the wall above. I searched high and blue for navy buffalo check wallpaper. I only found two and one was crazy expensive and the second is still a contender. You can find that here. While I was sitting on the wallpaper idea I remembered that I had seen people use fabric on the wall with liquid starch. I lucked up and found the perfect buffalo check fabric at Hobby Lobby and decided to give it a shot. It was only a 4th of the cost of the cheapest wallpaper I had found. 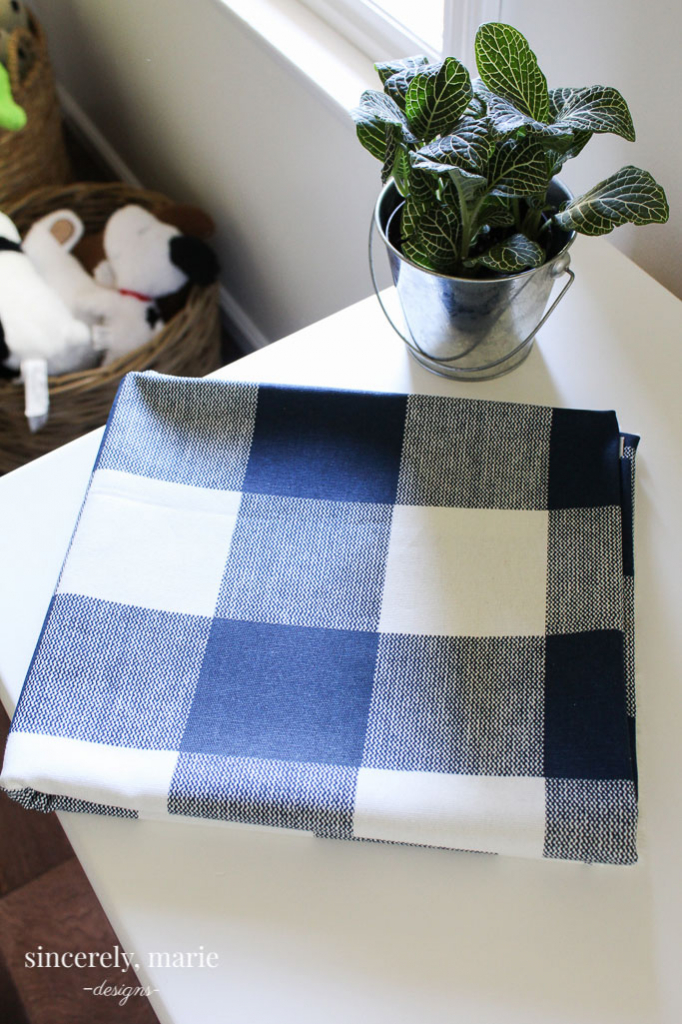 We tacked it up and all seemed good. Well, people it was horrible. It took some wrangling by myself and Josh to finally get it up on the wall with the starch and when we did it was wavy. We both were so tired that we just sat there and laughed because it truly made us feel sea sick. The lines were going every which way but straight. We took it down and tried again, three times to be exact. That’s we we both agreed with scratch it. That fabric is going to live out its life as throw pillows, ha! I think the fabric idea would have been a good one had the fabric we’re using been a little forgiving, maybe more of a free flowing design. It did stick great though and came down without a hitch. If it’s something you’re wanting to try I say go for it just be choosy with the fabric you use.

Now I’m back to the drawing board to see what inspires me and then I’ll finish the wall. I’m not sure if I’m going to go with the wallpaper or in a difference direction all together. I had thought about painting the board and batten blue and leaving the above wall white and adding a large piece of Star Wars artwork. We’ll see! 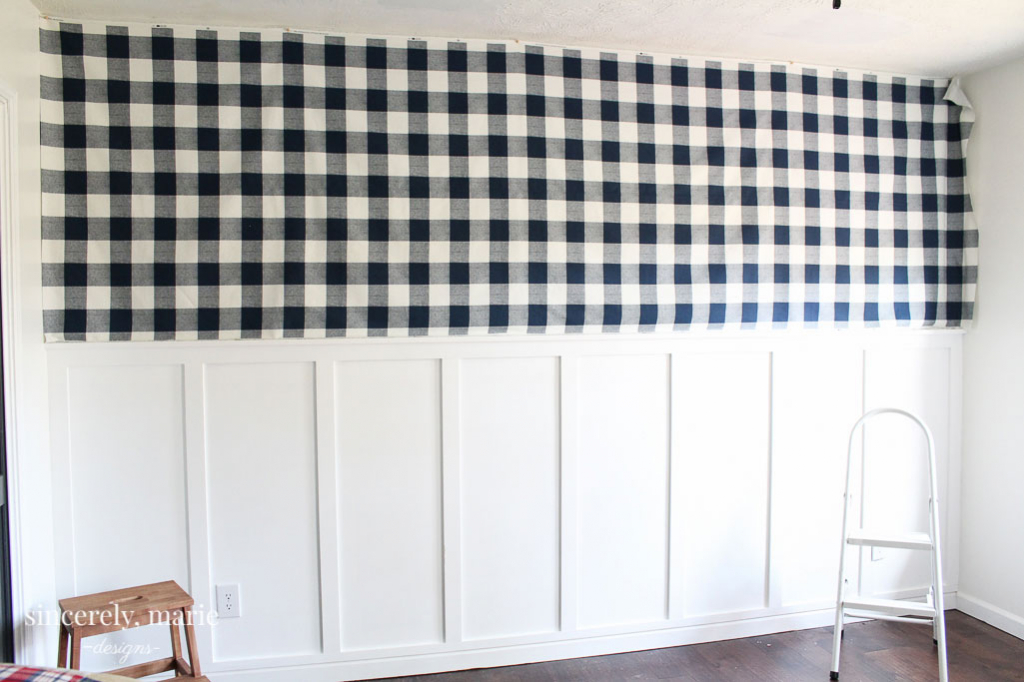 I had decided early on that I wanted to incorporate an small arm chair into the space. We read books almost every night and the three of us trying to cram onto his two bed wasn’t the most comfortable. I had my eyes set on the Jennylund chair. It’s a classic style and with changeable slipcovers it seemed like a perfect choice. We have the sectional in our family room and after being able to remove the cover and wash it when we need, I couldn’t imagine not having that ability in his room. I got super lucky one afternoon when I came across someone selling an almost new one for $25. Lets just say I ran to pick that thing up! It had a the floral cover on it, which was in great shape so I kept it but purchased a more neutral cover that can be bleached it needed. 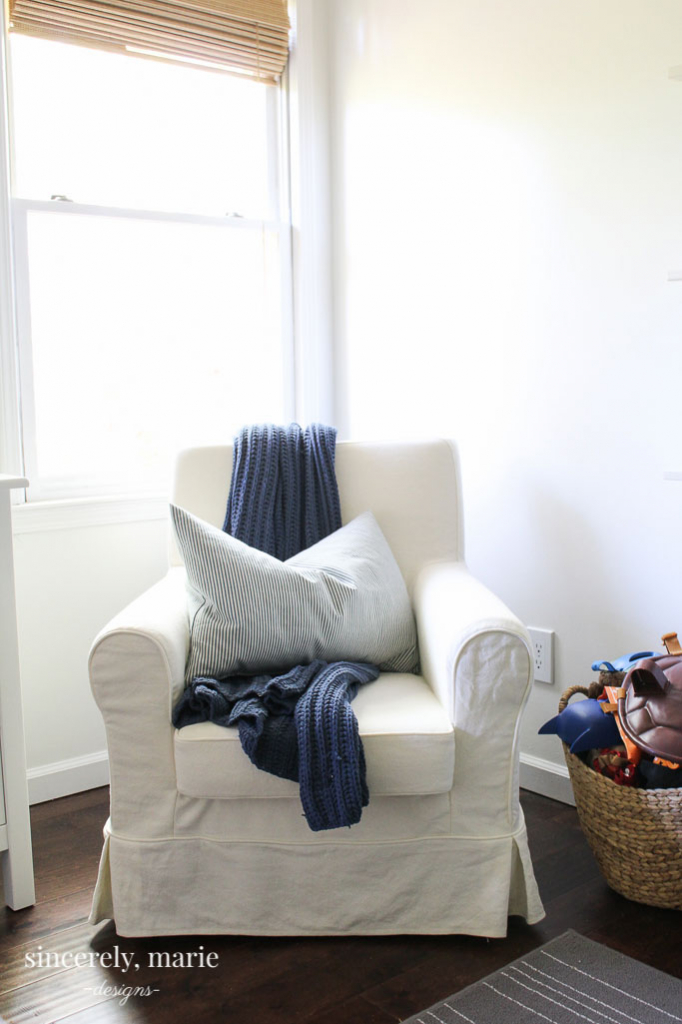 I found these cute Star Wars blueprints and purchased them and had them printed at my local Staples. You can find each print here – Death Star , Star Destroyer , Millennium Falcon , and the At At Walker.  Sadly, I’m one frame short and I can’t remember when I purchased them for the life of me. I had originally thought they came from Michael’s but I was unable to find them. I’ve got a little shopping around to do, I suppose. 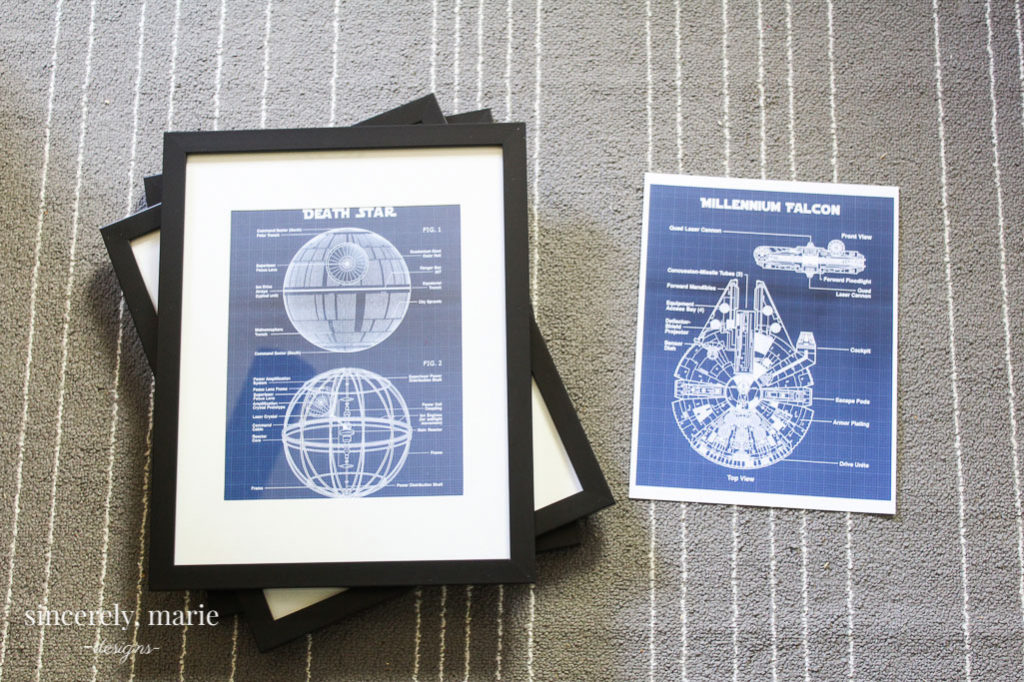 I hope to have the whole update wrapped up in the next couple of weeks, fingers crossed. If anyone tells you it easy to find the perfect items for a space, they’re lying. I can attest that it takes time sometimes and you really don’t want to rush the process or you’ll end up with a sloppy space.

Let’s talk paint! So while I’ve been updating Charlie’s room I had the wild idea to freshen up our family room. I have a billion projects going on all the time friends. I’m not sure if it’s productive or crazy, lol. In all honesty, we’ve been in our house now 2 1/2 years and the family room is probably the most used room aside from the kitchen. The walls were dingy and needed some love. This room is north facing and is one of the darkest rooms in our house when it comes to naturally lighting. The outdoor space behind it is wooden and liked to give the old paint color a green hue on cloudy days. I really wanted to brighten up the space while also keeping it warm and inviting.

Here’s three colors that I tried. I thought originally about Dove White, one of my favorite whites but thought that it would be much too beige looking in this darker space. I’ve used Simply White by Benjamin Moore in my dining room before as well as our guest bedroom and my office. I also tried Oxford White by Benjamin Moore, which is in Charlie’s room. The third color is Extra White by Sherwin Williams. I loved the crisp and bright color of it that I was seeing on Pinterest. 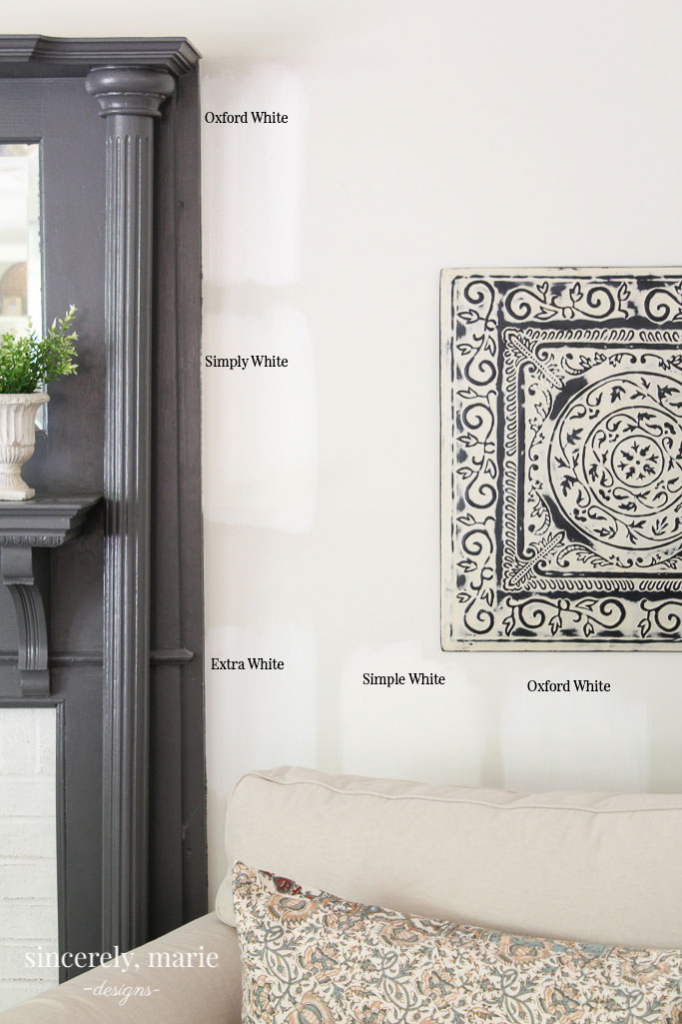 The extra white felt too sterile for me, especially when the sun would hit it. The Oxford White was nice but had more of a yellow undertone that I didn’t want.

Here’s a shot of the colors in the far left corner of the room. It’s crazy how darker they look here. I always recommend getting a sample color and living with it for a couple of days, especially if you’re painting a larger space. Most paint colors have undertones that will show up depending on your lighting. 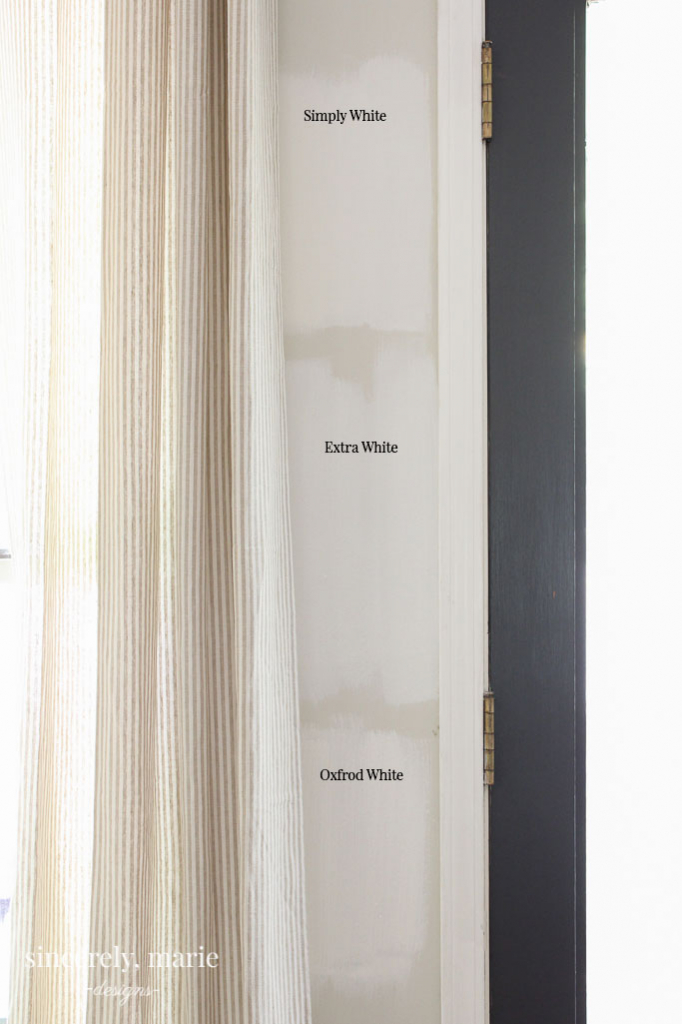 Spoiler alert – the Simply White won out and our living room is sporting a new color today! I can’t wait to share the fresh space with you guys. I’m pretty sure my hands will protest if I paint anything else any time soon. They’re over it!

I’ve still got some work cut out for myself and I’m really looking forward to it all coming together. There’s something so refreshing about updated a space. It not only forces you to cut the clutter but it;s like a breath of fresh air has blown through. It’s a great way to kick off the summer! 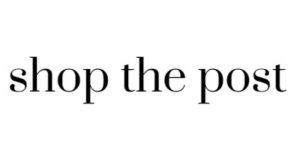 Hi, I'm Amanda Marie and I'm so glad you're here! I'm an old soul that loves traditional English style. We're currently renovating a southern colonial in a small town in north Ga. This is where I share DIY projects, decorating, family recipes, and ideas for a classic style home.

It’s a new year full of possibilities! I don’t

I add several blog posts in mind for this week and

Just six more sleeps until Christmas 🎄 This is

Last year I shared the three recipes I use when ma

Good morning! I’m here in IG much later than I t

I finished decorating our little tabletop tree the